A Conversation with Jenny Rozanski 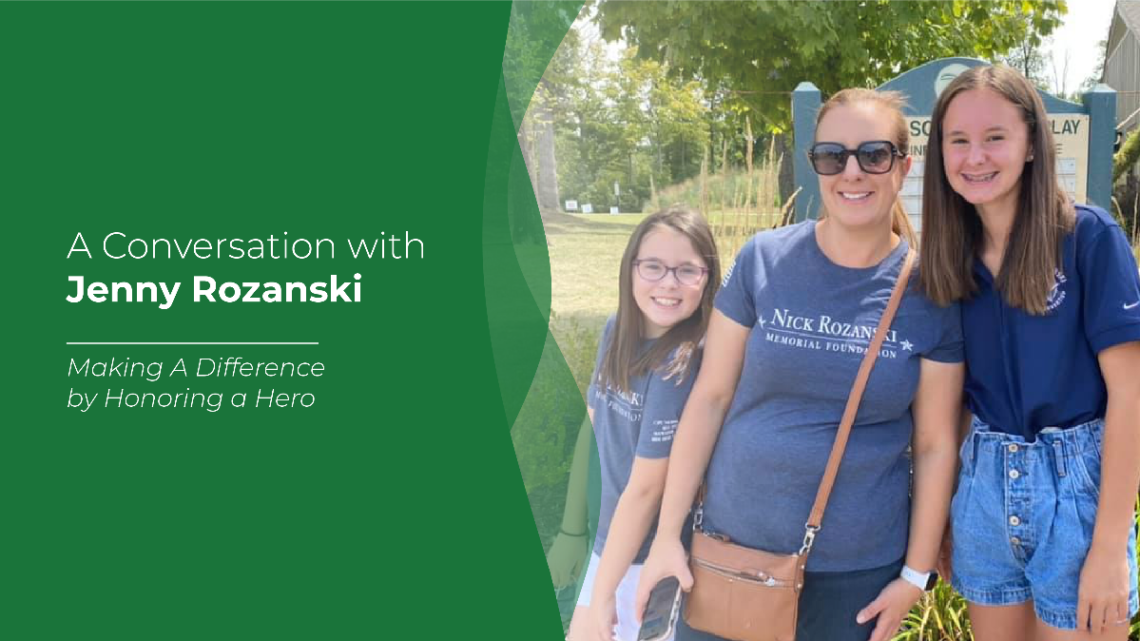 Making A Difference By Honoring A Hero

Captain Nicholas J. Rozanski was a member of the Ohio Army National Guard’s 37th  Infantry Brigade Combat Team and was killed in action on Wednesday, April 4, 2012, supporting Operation Enduring Freedom in northern Afghanistan. Nick’s death was an unthinkable tragedy for his wife, Jenny, and two little girls, and was one that shook the entire Dublin community.

Almost immediately, however, Jenny Rozanski put into motion plans to establish the Nick Rozanski Memorial Fund to honor Nick’s legacy. The original idea was to award one scholarship to a student at a Dublin high school, but the overwhelming support of Nick’s friends, family, colleagues, and community made so much more possible.

The Fund, established originally through the Dublin Community Foundation, is now the Nick Rozanski Memorial Foundation and operates with the support of the DCF and the Columbus Foundation. To date, the NRMF has given just a little under $200,000 to support Dublin City Schools seniors and military and veteran organizations.

What is the Nick Rozanski Memorial Foundation up to now? How has its work been impacted by the pandemic?

We are continuing to raise funds to support scholarships and military and veteran organizations, although obviously, things looked a little different this past year. Our fundraiser, the Missler-Rozanski Memorial 5K + 1 Mile Walk was virtual last year, but we are looking forward to hosting it in person this year. It will be held Saturday, May 15 at Glacier Ridge Metro Park, although a virtual option still exists for those who may not be comfortable participating in an in-person event.

We were still able to hold the annual “Play It As It Lies” Golf Outing in person in 2020, but did not host the Family Fun Night following the outing as we typically do. We will definitely be hosting the Golf Outing again this year, and are waiting to see whether we will be able to hold the Family Fun Night this year. So, while it looked a little different, we still had tremendous support for our fundraising efforts. As a result, we were able to give out $36,000 last year.

Who does the NRMF support?

In addition to the three $1,000 scholarships that we give to Dublin City Schools students each year, last we also continued to work to fund our endowments at The Ohio State University and Columbus State Community College, as well as National Church Residences homeless veterans’ building on East Livingston, and Veterans Companion Animal Services.

The endowment at OSU and CSCC both support veteran education. At OSU, we provide funds to a student who has utilized the GI bill for their education to help them get through their last semester in school. Although we have not given money out through the endowment at CSCC yet, we are working to support an EMS student or a firefighter in the Fire Sciences Department by giving them a scholarship to pay for their equipment, which isn’t covered under the GI bill.

Every year, our Board decides which organizations we are going to support. For instance, this past year we were planning to work with the Washington Township Fire Department to support an Honor Flight, but of course, that didn’t happen. Those plans are on hold and we still hope to do this in the future. Regardless, we stay consistent in supporting DCS and Military and Veteran organizations, but we are working to be a bit more strategic as we move forward. We would like to select a couple of organizations with which we can build long-term relationships.

What are you most proud of when it comes to the work of the NRMF?

Honestly, that the NRMF even exists; that we have found another way to leave a legacy for Nick in Dublin and within the military and veteran communities. In the early days, I would ask myself “Why am I doing this?” It was a lot of work and could be stressful at times. But now it has fallen into place and it has been very rewarding.

Are your girls involved with NRMF?

It is important to them,  and they really like having the events. This past year they got to go to the golf outing, and it was an amazing experience – for them and those who participated. The girls had the chance to see so many people impacted by Nick and to share his legacy with them. Those who were there got the chance to see that the girls have grown up and are thriving. My long-term goal has always been for them to be involved with the Foundation at some level as they get older. But, I really want it to be in a way that is meaningful for them, depending on where their interests lie and how they feel they would like to carry forth Nick’s legacy.

So, tell us about you and the girls

I recently went back to Ashland University to get my teaching degree and will be finishing up my student teaching in the fall. I am hopeful that I can do that within Dublin City Schools, but that is yet to be determined.

Emma is in 7th grade and is active in lacrosse, cross country, and basketball in middle school. Anna is in 4th grade and does dance, lacrosse, and tumbling. I try to keep them well-rounded so they each take piano lessons, as well!